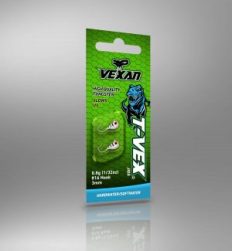 We’ve scored an EXCLUSIVE COUPON CODE over at Vexan.com for 25% Off your order from now until the end of November. Stand out from the rest of the pack and check out Vexan’s awesome new T-Vex Tungsten Ice Jigs. Also, now’s a great chance to complete your arsenal with a Vexan ice rod and Vexan Rod Bag just in time for early ice.

Use Exclusive IFD Coupon Code “ICEDEALS” to get 25% off!

Own and use any of this Vexan Gear? Take advantage of these Ice Fishing Deals? Give us your two-cents in the comments below.